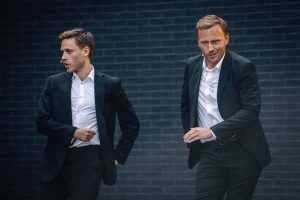 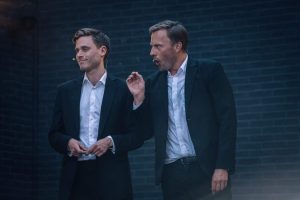 The performance project won the World Competition of The European Shakespeare Festival Network 2022. The performance was presented at the Shakespeare festivals in Craiova in Romania, Itaka in Serbia, Helsingør in Denmark, and Gdansk in Poland during the summer 2022.

Shakespeare’s famous tragedy about Romeo and Juliet and their tragic love affair takes place in Verona during the Renaissance. But the story could also have taken place today.

The text is based on the W&A visual art project “The wedding Invitations”:
From documentary photos of young couples in warzones, we have collected tragic love stories, and then created collages, paintings, drawings, performance art works, video-based works, and eventually this performance where the visual artworks play an important role as an integral part of the theater experience.

Norwegian actor Christian Hestø and Polish actor Piotr Misztela, perform Shakespeare’s tragedy while constantly adding to the narrative real stories of impossible or criminalized love from our time. All the stories are sad, the themes are serious, but the form of the performance is humorous. The tragedy of all these love stories is so evident and overwhelming that we can only relate to them with the theatrical means of humor. If not, we will probably lose our will to live and our will to love whoever we want to love.

Shakespeare achieved artistry with his own magnificent English language. We attempt to achieve a different artistry by playing deliberately with the contemporary English language spoken by the Norwegian and Polish actor. The language turns into a pure tool for communication, misunderstandings and equilibrist tongue exercises.

This minimalist and hilarious performance is a technical and physical precision clockwork. Like a Swiss clock. And the ultimate love song is included. After the two actors give us an emotional roller coaster from utter tragedy to absurd humor, the performance ends with an art video presenting without any filter some of the real tragedies, and we see and hear European youth expressing the real emotional catastrophe of forbidden love.